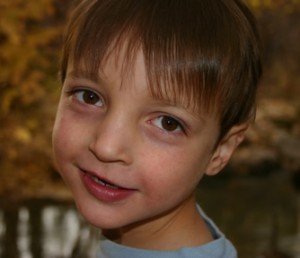 Our third son, Matthew, was born in 2000, a healthy baby boy and a small copy of me in many ways. By the time he was two years old people were calling him “mini me” because we looked so much alike. He shared my passion for things that fly, and like his older brothers he loved helping me with cool projects.  He dreamed of becoming a pilot and would talk about it often. He also liked a lot of my favorite movies — “Star Wars,” of course, and “the Rocketeer,” and later “Sky Captain and the World of Tomorrow.”

A turn for the worse

At around four years of age, things began to change. At first we noticed Matthew fainting, just quick head bobs, every few weeks, mostly at the dinner table. Over the next few months his condition worsened severely. There were no clear answers about what was happening until we finally learned that he had Lennox Gastaut Syndrome, a very rare form of epilepsy in children. We were shocked and heartbroken to say the least, and the prognosis wasn’t good. We were told that Matthew would likely develop many different seizure types, and that even with the latest medication they would be very difficult to control.  We also learned that most children with LG syndrome end up incapacitated, in a wheelchair by adolescence. We were determined to beat the odds.

My wife Laura, began to spend hours every day researching on the internet about our son’s condition. His seizures grew worse and none of the medications worked very well. The “drop” seizures were the most frightening.  With absolutely no warning at all, he would instantly lose consciousness and drop violently to the ground, as if someone turned off a switch to his brain. These seizures were impossible to predict, and they were dangerous.  We knew after the first one that he would need to wear a helmet. None of the helmets we found for epileptic children offered any protection for the child’s face – and they were so ugly they had “tease me” written all over them, so I used my best prototyping skills to make one from a hockey helmet, and I used bullet proof plastic for a face shield. That helmet saved his life on more than one occasion. I’ve made some cool inventions and prototypes over the years, but Matthew’s helmet is the one I am most proud of. 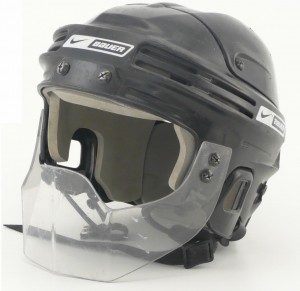 Part of the joy of fatherhood is teaching your children to do new things, like tying shoes or riding a bike. With Matthew it was different, he taught me much more than I taught him.

The first few years of Matthews’s condition must have been pure hell for him. Even though his helmet did a good job of protecting his head and face, his “drop” seizures were so violent and unpredictable that it was impossible to protect him from every possible scenario. After a few years of these seizures, he had lost most of his front teeth and had countless stitches to repair split lips, eyelids, chin and forehead. He was on heavy medication, routine hospital stays for days at a time, test after test with constant poking and prodding by doctors and nurses, and endless IV’s and multiple surgeries.

Through all the pain, injuries, and medical procedures, and even having to wear that darn helmet all the time, I never heard him complain. No “Why me?” or “Why do I have to take these pills and wear this dumb helmet?” He was an inspiration. He would often wake from a drop seizure in some kind of pain, but the first thing we would see was a smile, and then he would say “I’m okay!” I think he must have been poked with a needle hundreds of times during his many hospital visits, but I never heard as much as an “ouch”. In the midst of these difficult circumstances he infected everyone around him with happiness and optimism.

When Matthew was about seven, Laura, in her research discovered a diet for epilepsy that seemed worth exploring.  We understood that the diet was only temporary and was too dangerous for an epileptic child to be on for more than a few years. We knew that if Matthew’s condition was not cured by the diet, we would be back to the drugs and the helmet and a very uncertain future.

After an extensive hospital stay to get Matthew on the diet, we began to see improvement. It was soon apparent the diet was working for him. Within a few months Matthew was off most of his medication and out of his helmet.  He swam in the pool, rode his bike, climbed on the monkey bars, and played on the swing set.  He was a real boy again!

Although he was seizure free for the most part, his diet was very demanding. Every meal had to be carefully prepared and precisely weighed to within ½ a gram. Even the slightest deviation in ingredients, portion size, or the time he ate the meal, would bring the seizures back again.

The diet was not easy for Matthew; portions were extremely small, and strict observance was critical. Even one small piece of candy would throw the diet off. His will power and determination were amazing and inspiring to witness. He never cheated on his diet, even when we weren’t around and a well meaning neighbor or teacher offered him a treat. He would just answer politely,“ No thanks, that’s not on my diet”. He also never complained when everyone else was having a meal and he was eating his very small portion. A typical meal was 25 grams of chicken, 35 grams of thick cream, and 10 grams of cheese, placed on a small plate; it looked like barely enough food to make you salivate. 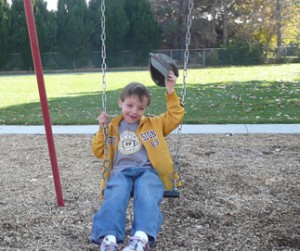 After more than a year on the Ketogenic diet, Matthew was 8½ years old and doing very well. We were all getting used to the strict demands of his diet, so it was time for a family vacation.  We booked passage on a cruise ship for November of 2008.  Packing for Matthew was like going to the moon. All of his meals for the 9 days required for the trip, had to be carefully prepared in advance, packed in small containers, and kept refrigerated while we carried them with us. We drove to California, boarded the cruise ship, and headed out to sea.

At the first meal we had together, I realize how hard it was going to be for Mathew to see his parents and brothers eating wide varieties of delicious food while he ate his pre-made starvation rations. I was very concerned about how this would affect him, but through the entire trip he never complained about the dietary injustice, not even the slightest, “Gee, I wish I could have one of those.” looks on his face.

After our first meal, I was refilling my drink at the buffet and noticed a bowl of lemon slices next to the water dispenser. Then it hit me! Lemon water was allowed on Matthew’s diet; he could have all he wanted. I quickly led him to the drink counter and showed him the bowl of lemons. I told him he could come to the buffet and get a glass of lemon water whenever he wanted. You would think I had just offered him the world by the smile on this face. He was so happy and grateful that there was something on the ship he could have. Matthew’s favorite things were the miniature golf on the ship, the tropical fish he saw from the glass bottom boat, playing on the sandy beach . . . and lemon slices.

Listen to the voice

On a particular Thursday in December of 2008, I came home from work determined to spend the evening finishing a project I had been working on. Then I heard that little voice — you know, the one that tries to keep you from doing something stupid, or unsafe, or wrong. This time the voice was telling me to put the project away and spend some extra time with my boys. I listened. I gathered up our three sons and spent the rest of the night together. We played games and wrestled and tickled and just had a great time together. And in particular, I had some wonderful, precious moments with Matthew, topped off with a piggy-back ride up to bed, followed by a hug and kiss goodnight.

I haven’t always listened to that little voice, but I did that Thursday night and I’m so grateful I did. When Friday morning came, Matthew was gone. He had passed away peacefully in his sleep from a rare seizure that stops the heart.

It’s a strange mixture of emotions that leaves you aching for the loss of your child, but also grateful he is no longer suffering. No more seizures, diets, stitches, or pain.

Our religious beliefs give us strength and faith that we will see Matthew again. What a happy reunion that will be! But for now,we have the precious memories of an extraordinary boy, and gratitude that we were blessed to have him in our lives for 8½ years.

My older sons, Alex and Patrik, still enjoy working on inventions and projects with me and we have great times together. But, with every new idea I have, I also think about Matthew and wonder how he would like it. Sometimes I imagine him playing with my inventions. Although I know he never will, it gives me satisfaction that other kids will enjoy them. It’s also comforting to know there’s a little bit of him in every project.

Matthew’s lessons for me